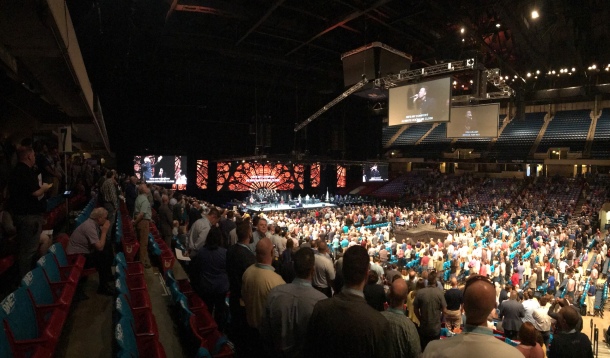 If you don’t know how SBC churches work, we do not have a hierarchy that directs local churches top down.  But we are a bottom up fellowship of cooperating churches.  We cooperate for Missions and Kingdom Advancement, as well as for training pastors and providing literature for church training.

We addressed some hard realities this week in an historic fashion.  yes the SBC was initially formed in 1845 over two primary issues, Missions, and the right to support or allow slavery.  One is great, one is not.

This week we addressed racial discrimination and sexual abuse in our churches that is often ignored, or swept under the carpet.  While the Convention cannot control a church, now we have processes in place to not allow them to be a part of our fellowship and also beginning a better process to train and equip our churches to protect themselves and their community and provide a safe place for worship and advancement of the gospel.

As I returned from the convention last week, I prepared to Report to my church about our convention.  I gave a detailed summary of our meeting, regarding missions, ministry, as well as these issues we faced.  And then I gave MY Annual Convention Sermon.  That is what I wanted to say to my church in light of what I had seen and heard during the week.

While I won’t give you my full report, I will give you the basics of the message I closed with.  The reality of racial discrimination in our culture, and sexual abuse in society that creeps into the church as well is evidence of the ongoing spiritual battle in which we live.  So, I took us to a passage we know, but often not in context.  Let’s look at it quickly.

So, here Peter says, in this world we must:

1. Be Vigilant and Alert v8

Your Adversary, the devil …

It literally means one who opposes in court with slanderous accusations.

We ARE under attack.  satan loves only himself.  He hates man because we are the Image-Bearers of God, and he attacks.

Oh, don’t miss something, satan is a counterfeit.  He wanted to be a god and was kicked out of Heaven.  He is NOT THE LION … Jesus is The LION, but satan prowls, roars, looks to devour, LIKE a lion.

“Prowl” is a picture of the Greek philosophers of Peter’s day.  satan walks about, seems to have the answers.  But he hides with intent to destroy.

He “roars”.  Why?  To frighten the flock, to run them, and then to attack the young, the old, and the weak.

Who then is he attacking, and who must we protect?

The Church – The bride of Christ, the light of the world

The Pastor – God’s messenger, the stars in Christ’s hand

The People – the sheep of his pasture, the apple of his eye, the object of his sacrifice.

All of these have received the redemption.  satan cannot get their soul but will ruin their lives if he can.

The LOST – they are condemned already, and destined for Hell and he wants to destroy their souls.

He wants to abuse the young so they will turn their backs on God.

2. Be Resilient and Resistant v9

So, as satan attacks … we … the strong … need to NOT be distracted

Be “sober-minded” or “self-controlled”.

The idea is not to allow our emotions or desires to be out of control. i.e. “take captive every thought and make it obedience to truth”

Be vigilant, alert, awake, we cannot fall asleep church, because evil does not sleep.

RESIST HIM – This is in the Imperative, meaning we are commanded to because we MIGHT NOT, yet we must.

Only two ways pride takes over here. 1) I’m too good for this or 2) I’m too strong to get attacked … Both of those thought are prideful lies.

I have news for us … Humility IS Coming either under the “counterfeit lion”, or The Lion of Judah’s Tribe”.

Humble yourself under God’s hand, patient for HIS Exaltation, or Humbled under satan’s attack and swallowed or devoured.

The roaring counterfeit lion makes us fearful, and falsely placed fear causes bad decisions that destroy lives.  So, take your concerns, to Jesus.  Give them to him.  Let go of them.  CAST Them.

If you haven’t been on your knees with your “concerns”, then you shouldn’t be sharing them with somebody else.  If you start a conversation with a hushed “I’m afraid that …” you are fearful, Cast your cares on HIM, dont gossip, don’t Post it on Facebook, don’t Tweet it, Cast it on Jesus.

Resist satan – Because God has not given us a spirit of fear, but one of power, love, and sound judgment.

My goodness what would happen if we never posted anything that wasn’t full of love and sound judgment?

James 4:7 says submit to God, Resist the Devil, he will flee

What is the Faith in which we stand firm?  It is NOT FAITH in “faith”.

No.  It is faith in the Grace of God made possible at the cross, which enables a condemned sinner to be a Justified, Sanctified, Glorified SAINT.

9 The Lord is a refuge for the persecuted, a refuge in times of trouble.

16 Therefore the Lord God said: “Look, I have laid a stone in Zion, a tested stone, a precious cornerstone, a sure foundation; the one who believes will be unshakable.

Unshakable in the Faith

The Whole Church is suffering.

We looked the other way on Slavery.

We look the other way on injustice.

We mock other parts of the church when they had allowed abuse, and then are guilty of the same.

We must stand and fight for the helpless, hopeless.

… on a firm foundation, humble under our Lion …

3. Be Encouraged and Strengthened

8 He waits in ambush near settlements; he kills the innocent in secret places. His eyes are on the lookout for the helpless; 9 he lurks in secret like a lion in a thicket. He lurks in order to seize a victim; he seizes a victim and drags him in his net.

The Lord Fights for the Victim

16 The Lord is King forever and ever; the nations will perish from his land. 17 Lord, you have heard the desire of the humble; you will strengthen their hearts. You will listen carefully, 18 doing justice for the fatherless and the oppressed so that mere humans from the earth may terrify them no more.

And you know what?  The Lord Will Rise Up for the Helpless, the humble, the oppressed

All grace is from him, and he hasn’t run out of Grace.

B. By What He Has Done – he has called you to Eternal Glory in Christ

From the cross, the Love of God cries out and said “I know sin, I know justice, I know injustice.  I have a plan, I have a way, and it is enough for you!”

But don’t forget, the Cross isn’t the end of the story

C. By What He Will Do … Restore … Establish … Strengthen … Support

If you are a victim of abuse, discrimination, the attacks of evil … this is not the end of the story … LOOK at the cross and see the Love and Justice of God, but Look at the Empty Tomb and see the Victory, The Life, Resurrection.  See the Possibility – Resurrection Power, and Resurrection Posterity.

D. With Eyes On Eternity – for a little while … To him be dominion FOREVER

God is a Finisher.  God is a Winner …

our Lion Is the Alpha but He is the Omega.

He is the Beginning and HE is the End … and He Is Coming Soon.

In Just A Little While.

The Point of all of this is that we get caught up often fighting the wrong fights.

“If I WIN this fight, who will be in Charge, and who will get the Glory?”

If the answer is NOT God … then Let it Go, you are fighting the wrong fight.

v11 to Him be Dominion (glory) forever AMEN

12 Fight the good fight of the faith. Take hold of eternal life to which you were called and about which you have made a good confession in the presence of many witnesses. 13 In the presence of God, who gives life to all, and of Christ Jesus, who gave a good confession before Pontius Pilate, I charge you 14 to keep this command without fault or failure until the appearing of our Lord Jesus Christ. 15 God will bring this about in his own time. He is the blessed and only Sovereign, the King of kings, and the Lord of lords, 16 who alone is immortal and who lives in unapproachable light, whom no one has seen or can see, to him be honor and eternal power. Amen.

Prepares us to hear “well done”

One thought on “My Convention Sermon 2019”