That’s the word here in Hebrews 10:19, “therefore since we have confidence to enter the most holy place by the blood of Jesus.  By a new and living way opened up through the curtain that is his body

Sacrifices had been offered since the giving of the law.  They followed set rules.  If the sacrifice was unaccepted, the priest would die and the people would remain in their sin.  But in Christ he was our High priest AND our Sacrifice.  His offering was perfect and acceptable, and so he offered it.  And no longer was it a curtain that divided us, but the blood of Jesus that opened the curtain to allow us access to our holy God.

V11 says that day after day they stood and offered the same sacrifices which did nothing to address the true problem of sin.  But this priest, Jesus Christ, offered one sacrifice and offered it once for all.  For all who would receive, and for all sin they had or would commit.  Once for all people, once for all sin.  And when he had offered that sacrifice he was able to sit down.  Why because, as he said on the cross, “It Is Finished” “Paid in Full”. “Transaction complete’. “Battle won” “Purchase complete.”  And so he has sat down until it is time to pick us up.

Notice the beautiful work.  V14 says by one sacrifice, he has made perfect those who are being made holy.  Such a beautiful picture of justification and sanctification.  Without justification, a declaration of forgeivness and guiltlessness, there can be no sanctification, a state of perfection.  So it is not a magic trick, or an immediate action order of GOD, it is a declaration of a project begun.  The moment I trusted him, he began a work.  And he who began a good work in me will be faithful to complete it in me.  So v17 says he will not remember our sins anymore.  Then he says that because of the completeness of the forgiveness there is never a need for an act of sacrifice again.

So we have confidence in the completeness of the work, and the acceptance of the one to whom it is offered.

V22 let us draw near with a sincere heart, in full assurance of faith. Guilty conscience is gone, bodies washed.  What is this confidence we have?  It is is the comprehensive powerful work of salvation in the cross.

So …. let us hold on hard to the faith because it is all we hoped it would be and so much more than we can dream, because it is based on him and not us

And … encourage, spur, one another to do the right thing

And … not give up meeting together

If I realize what he has done for me.  If i realize the completeness, the comprehensiveness, I will hold on and live out the truth. I will not try and make it something it is not.  I will not let my brother flounder, 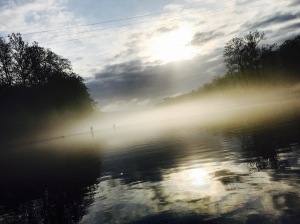 but pick him up and encourage him.  I will not miss an opportunity for worshp and service, not because of me but because of what was done FOR me and has been placed in me.

I have confidence in my savior, sacrifice, priest and the work he has wrought in me.

Where is your confidence?  Can I introduce you to the only confidence worth having?